The Benefits of Automating with Lifting Robot 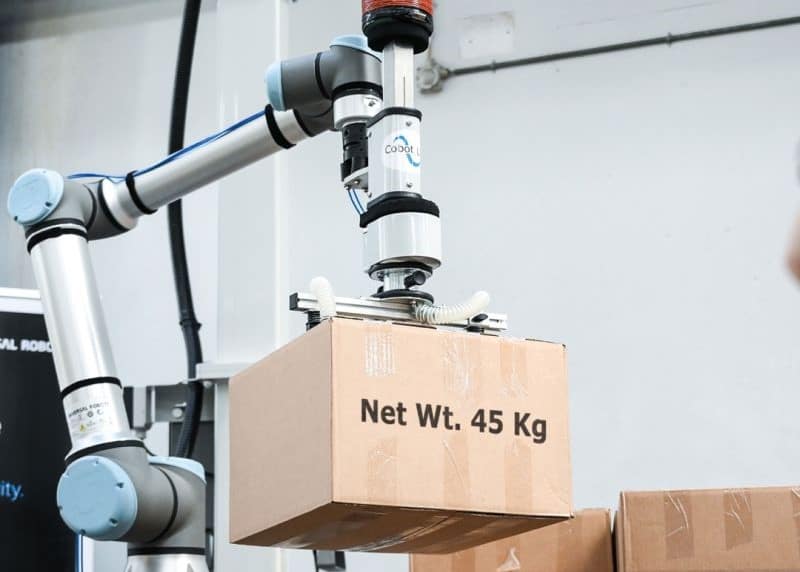 Cobot Lift is a danish company based in Slagelse that developed a lifting robot that can lift sacks, boxes, and suitcases of up to 45kg with vacuum and supported by a vision system. On a monthly basis, the robot costs the same as the salary of a temporary worker in one shift costs for four days.

In a time of labor shortages and when robot technology is cheaper than ever, there is a good case for taking a closer look at how automation can contribute to the efficiency of danish companies.

Cobot Lift in Slagelse specializes in stationary and mobile collaborative robots, that can fully automatically lift and precisely place sacks, boxes, buckets, and another payload up to 45 kg. Importantly, of course, at a price that makes it a very good investment.

“We have developed an affordable lifting robot, that can remove a lot of the monotonous and stressful work that is still prevalent in many danish companies. This may be the case, for example, when pallets need to be loaded or unloaded. On a monthly basis, the Cobot Lift costs are the same as the salary of the temporary worker in one shift costs for four days”, says the CEO of Cobot lift Henrik Elm Gulløv, who suggests that the money can quickly be earned back just from the temporary worker budget.

“The human body cannot, in the long run, keep lifting and moving heavy sacks or boxes to and from pallets day in and day out. Humanly, socially, and economically, it’s a far better investment to use lifting robots. Our cobot not only ensures a better working environment in industry, in logistics companies, and at airports but also helps to solve the business community’s problems in finding labor. Finally, it can release employees to create added value elsewhere in the company”, he continues.

At hi Tech & Industry Scandinavia 2021 in October, Cobot Lift demonstrated its technology to 20 employees of the Danish Working Environment Authority, who sought inspiration to improve the working environment of danish workplaces.

“The Danish Working Environment Authority was at the fair to see what the future in the field of industry brings. There is no doubt that both automation and robotics are gaining more ground; and if used properly, will have a positive effect on the work environment. Especially the places where it replaces unergonomic work movements such as lifting, bearing, and monotonous movements”, says Morten Vestergaard, head of supervision at the Danish Working Environment Authority.

Some companies start with the domestic market. Cobot Lift started with the whole world and now, after three years on the market, has an export share of 95 percent.

The toothpaste manufacturer Colgate had the installation of the first Cobot Lift solution at one of their factories in India, and due to the success of the deployment Colgate and Cobot Lift are now in dialogue to expand the collaboration to three other factories globally, respectively in Guatemala, Thailand, and Greece, as well as to several other Colgate factories in India.

“Colgate already uses vacuum lifters from our supplier TAWI in their factories. The smart thing is that Colgate needs to only add a cobot/robot and Cobot Lift technology – and they can reuse the vacuum lifter in the new automated solution, this creates a manageable investment with higher productivity, greater profitability, a better and more attractive working environment”, says Henrik Elm Gulløv.

“The bake goods producer Puratos, which has 64 factories globally, has gotten a Cobot Lift installed for Sack depalletizing in Austria, where the solution lifts 40kg sacks places them near a flour mixing machine, where the workers can cut open the sacks without straining their backs with heavy lifts and twists. Puratos has experienced in some of their factories, up to 50% of workers have been absent at the time due to corona and have had a similarly high number of the temporary worker which hasn’t been ideal. The choice of Cobot Lift technology for Puratos is also about the security of supply and uptime and about being able to create social distance in the workplace”, he explains.

Investment in unique robotics technology to improve the working environment in industrial plants and airports.

The Benefits of Automating with Lifting Robot

Cobot Lift is a danish company based in Slagelse that developed a lifting robot that can lift sacks, boxes, and suitcases of up to 45kg

Puratos is a multinational company that offers products for bakeries, patisserie, and chocolate sectors. The Challenges  Back injuries in the workplace cause one in five

New Investor in the board Karina Bergstrøm Larsen

Sold her business for 700 million: Now she is entering Cobot Lift, which wants to deliver to the whole world

Cobot Lift will be a guest at Pick, Pack, Pall event organized by Universal Robots A/S. We are thrilled to invite you

We use cookies on our website to give you the most relevant experience by remembering your preferences and repeat visits. By clicking “Accept”, you consent to the use of ALL the cookies.Read More
Cookie settingsACCEPTDismiss
Manage consent

This website uses cookies to improve your experience while you navigate through the website. Out of these, the cookies that are categorized as necessary are stored on your browser as they are essential for the working of basic functionalities of the website. We also use third-party cookies that help us analyze and understand how you use this website. These cookies will be stored in your browser only with your consent. You also have the option to opt-out of these cookies. But opting out of some of these cookies may affect your browsing experience.
Necessary Always Enabled
Necessary cookies are absolutely essential for the website to function properly. This category only includes cookies that ensures basic functionalities and security features of the website. These cookies do not store any personal information.
Non-necessary
Any cookies that may not be particularly necessary for the website to function and is used specifically to collect user personal data via analytics, ads, other embedded contents are termed as non-necessary cookies. It is mandatory to procure user consent prior to running these cookies on your website.
SAVE & ACCEPT