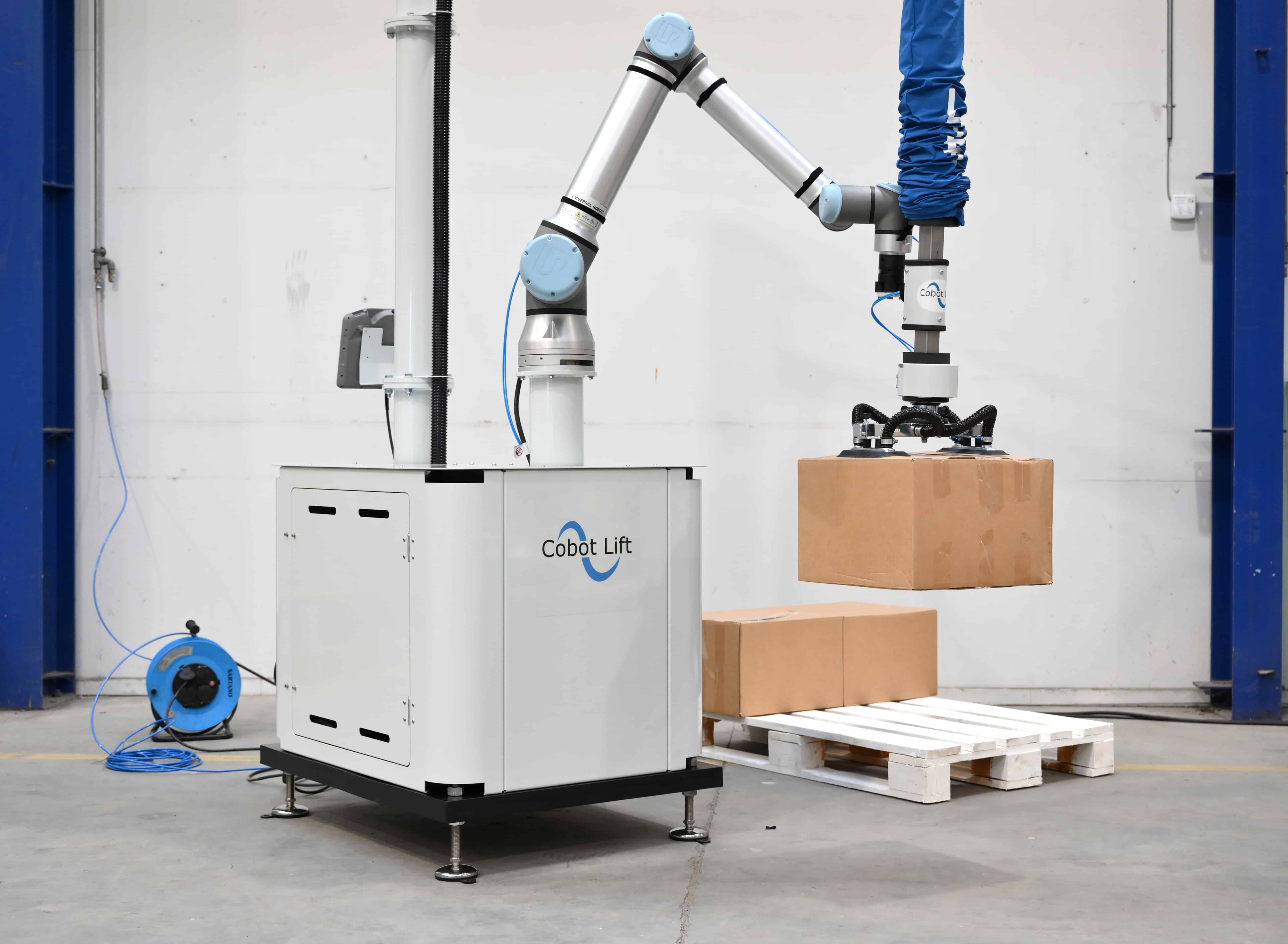 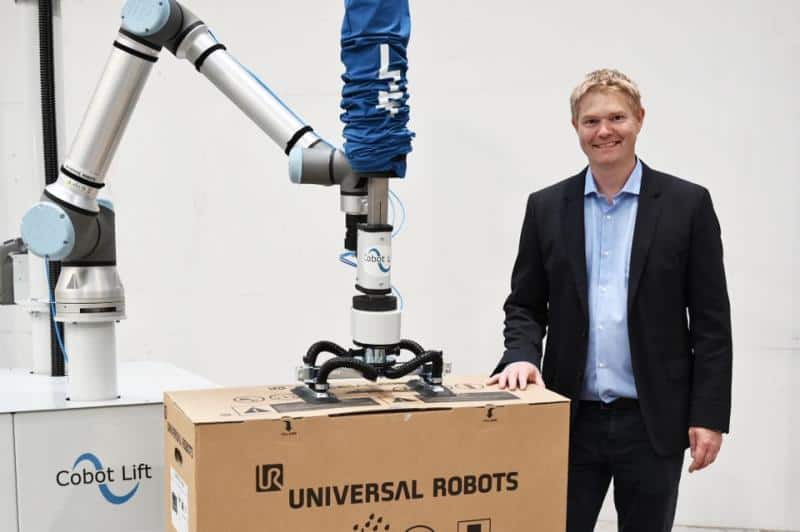 Cobot lift has opened a sales window from Industrivej in Slagelse to the whole world. With a professional setup for online meetings and demonstrations of the company’s robot technology has made it possible for Cobot Lift to increase their revenue considerably through contact with new costumers from all over the world. Till this day they have a network of distributors in 27 countries.

Cobot Lift stands behind a unique invention which is increasing the payload from 10 til 45kg. The technology makes it possible to combine the power from a vaccumlifter with a robot arm from Universal Robot (UR). The vaccumlifter gives at the same time new opportunities to automate handling of items which can be difficult to lift such as sacks. The tool which is UR Plus Certified is not only interesting for industrial companies but opens up for new possibilities in other applications as well where heavy and frequently used lifting motions is a part of the job.

At Industrivej Cobot Lift has a showroom, where they have succeeded with many demonstrations of their robot technology, likewise as fares has been an important sales channel.

– “There wasn’t that much in the first few months, but we could feel a big interest through LinkedIn, where we post many videos. And when we participated in a webinar with Universal Robots, which at the moment had over 100 participants from 17 different countries it gave is a seriously boost in our online activities” says CEO and Co-founder Henrik Elm Gulløv.

Live demos is a strong channel

– “We have previously helped Cobot Lift with implementing a It-strategy. In this case they wanted to create an extraordinary experience for customers while livestreaming. It resulted in an interesting setup, which among others also could drag use of” says Kristian Kamper, Co-owner of OpenBox.

– “What we have done for Cobot Lift is, that we installed more cameras and sound systems so the customer can experience the robot from various ancles and follow its movements close up. Cobot Lift controls the camera ancles which is securing a high quality in the demonstration,” says Kristian Kamper.

Each week Cobot Lift hosts at least 5 online meetings with distributors and costumers from all over the world.

– “Live demos are an incredible strong channel. It enables us to give a total insight of the product and close deals online. In three months, we have reached the same revenue as we did for the whole last year,” says Henrik Elm Gulløv and adds:

– “The market has changed, the trust in digital channels has increased even higher and our professional setup has been a very good investment”.

On top of the first corona stomach punch, the activity level at Cobot Lift, which has 12 employees is higher than ever. At the same time the new increased online activities have opened up for more possibilities.

– “Till now, we have primarily worked on the hardware, but from now on, we will also focus on software and bet even more on services which can be remotely controlled. That’s why we have just hired a programmer from France”.

However, Cobot Lift is managing and exploiting their digital sales window, they are looking forward to a more open world again.

– “We are looking forward to participate in fares again, with that said we reach and meet more people that way. We are also registered in The World exhibition in Dubai, so now we must wait and see when it can be held,” says Henrik Elm Gulløv.

If you want to read the article in danish kindly click on the bottun below – Slagelse Erhvervscenter.

(The article is written by Mette N. from Slagelse Erhvervscenter and translated by Deniz M).

Puratos is a multinational company that offers products for bakeries, patisserie, and chocolate sectors. The Challenges  Back injuries in the workplace cause one in five

New Investor in the board Karina Bergstrøm Larsen

Sold her business for 700 million: Now she is entering Cobot Lift, which wants to deliver to the whole world

Cobot Lift will be a guest at Pick, Pack, Pall event organized by Universal Robots A/S. We are thrilled to invite you

Read About Our New Distributor HMI-MBS

Growth in a Time of COVID

Talking to Gulløv it’s clear he has grand ambitions for the company, but he’s having to realise those conditions under unusual constraints.

“First, how do we effectively grow our business in this corona-restrained world?” he asks. “We’re not able to travel so we now do live demonstrations remotely. We have almost a tv studio in our assembly hall. It can become a strength for us in that we don’t have a large organisation, we just have that video studio instead. Last week I was demonstrating to Chile and then to the Middle East. So we can grow, we can do business with good virtual support.”

Menu
We use cookies on our website to give you the most relevant experience by remembering your preferences and repeat visits. By clicking “Accept”, you consent to the use of ALL the cookies.Read More
Cookie settingsACCEPTDismiss
Manage consent

This website uses cookies to improve your experience while you navigate through the website. Out of these, the cookies that are categorized as necessary are stored on your browser as they are essential for the working of basic functionalities of the website. We also use third-party cookies that help us analyze and understand how you use this website. These cookies will be stored in your browser only with your consent. You also have the option to opt-out of these cookies. But opting out of some of these cookies may affect your browsing experience.
Necessary Always Enabled
Necessary cookies are absolutely essential for the website to function properly. This category only includes cookies that ensures basic functionalities and security features of the website. These cookies do not store any personal information.
Non-necessary
Any cookies that may not be particularly necessary for the website to function and is used specifically to collect user personal data via analytics, ads, other embedded contents are termed as non-necessary cookies. It is mandatory to procure user consent prior to running these cookies on your website.
SAVE & ACCEPT